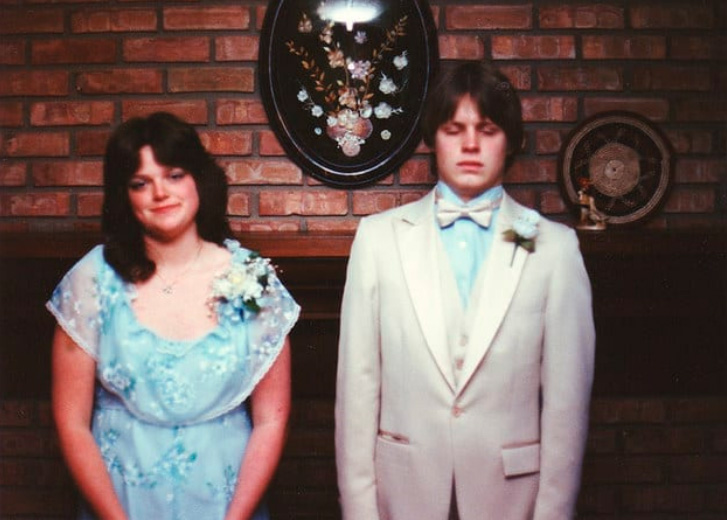 What's so funny about this?

Above all, digital still seems recent to me. I mean, it's only been around for 22 years, in my life at least. I sometimes forget that a whole generation has been born and has grown up without experiencing cameras that don't instantly show what a picture looks like.

I was recently idly flipping through one of those web features that make you click "Next" to see a succession of pictures. The category was "Amusing Prom Photos." In a photo of a couple (above), probably from the '70s or '80s, the boy had his eyes

. That appeared to be it. Curious, I turned to the caption to try to find out what was supposed to be amusing about the picture.

The caption writer assumed that the boy was "sleepy" and had closed his eyes on purpose. "He doesn’t like to play by anyone else’s rules," the writer opines—imputing motives with abandon—"and if he wants to shut his eyes, he’s going to shut his eyes." More explanation of tech from olden times was felt to be necessary: "This photograph was taken on a camera that didn’t immediately show what it looked like. Instead, they had to wait for the picture to be developed to discover that's the face he pulled on his and his date's very special prom night."

"The face he pulled"? The writeup didn't seem like it was meant to be ironic. The caption writer actually seemed unaware of the possibility that the boy had simply blinked as the exposure occurred and that no one was aware of it when it happened.

I'll fax it to you
Here's a guy making fun of an antique camera…and it's not even a film camera.

(The guy in the video, James Veitch, is the humorist who got famous giving TED Talks about talking back to spammers. Here's another one of his I had never seen before. Very funny.)

Another thing that's mostly of the past now…I ran across a comment recently that noted that redeye was something that "used to happen with old cameras." And come to think of it, I don't encounter much if any mention of redeye any more.

I wonder what other features of "old" photography that we take for granted are actually unfamiliar to the generation born after 1995? There must be more.

Mike
(Thanks to Brian Drinkwater)

Original contents copyright 2019 by Michael C. Johnston and/or the bylined author. All Rights Reserved. Links in this post may be to our affiliates; sales through affiliate links may benefit this site.

Steve Jacob: "I bought my first SLR in 1981. I bought my first digital camera in 1999. It's now 2019. I have officially been a digital photographer for longer than I was a film photographer. It just doesn't seem like it because time passes so much faster when you get older."

Roy Feldman: "I photographed for Ford Motor Co. for a few years and frequently photographed Bill Ford at podium speeches and auto reveals. Nicest man in the world, but he has a eye condition that causes him to rapidly blink and water after a few minutes of bright light. Knowing this I always over-shot everything on film with the knowledge that in three quarters of the pictures he would have closed eyes. Really happy when digital came along. Felt sorry for photojournalists who weren't aware of this 'feature' of Mr. Ford. Papers ended up using a lot of 'provided by Ford' (i.e., me) in their coverage."

Tommy Williams (partial comment): "Having to decide ahead of an outing whether you plan to make photos inside or outside—due to both color balance and film speed."

Dennis: "Running out of film!"

Tom: "Not long ago I was browsing around what was effectively a junk shop of old film cameras where a young woman was intent on purchasing a TLR. She'd narrowed it down to a Lubitel but the guy running the shop was not offering much guidance. I pitched in, pointing out she could probably find a decent light meter app for her phone. She looked puzzled. When I mentioned 12 exposures she looked shocked. I hope it worked out for her.

"Meanwhile, a young guy was asking how to set a film camera to black and white."

Clay Olmstead: "1. Reciprocity failure. 2. Always shooting with the same speed of film so you could judge the exposure based on light conditions without having to use the light meter. 3. Being the only person at a gathering with a camera."