Next week's crit print is gorgeously well crafted. I picked one that came in a stout box thinking it wouldn't be damaged this time. Another picturesque subject, but still, good things to talk about.

I really like it that I got to launch the "Print Crit" with a "lo-fi" black-and-white inkjet print made from a digital image of the groundglass of a camera obscura—an image cast by a single-meniscus lens in a brass barrel. That tickles me with its radical combination of now and then. And what nice serendipity—it really was the first package I opened. Thanks again to Frank. 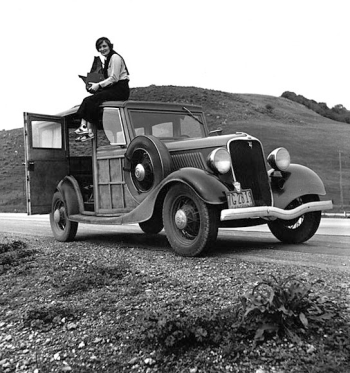 camera obscura is really just a viewfinder, when you think about it. It's a way of looking at the image cast or projected by a lens. A slide projector in reverse, essentially.

I've always been fascinated, and somewhat preoccupied I guess, by viewfinders. They're a crucial feature of almost all cameras. They dictate how precisely we can see what the film is going to capture, and with what kind of fidelity to the scene. Almost all cameras have some sort of way to "find the view" and how they do it determines to an important extent how the camera operator, the photographer, is able to interact with the scene in front of her.

Dorothea Lange with the camera she used to take "Migrant
Mother." I've looked through one of those.

Pentax, an old friend
That's why I was pleased to learn that Pentax is paying special attention to the viewfinder of its upcoming new APS-C flagship camera, as yet unnamed. Bad luck for Pentax, which doesn't release very many truly new cameras, that it planned to launch its new flagship reduced-sensor-size DSLR at CP+, which normally would have taken place at the dual venues of Pacifico Yokohama and Osanbashi Hall in Yokohama, Japan, in February. Of course it was cancelled this year, so the introduction is on hold.

A video's been released that indicates something pleasing, though, which is that Pentax has paid special attention to the viewfinder. It will reportedly have a magnification of 1.05x (that's magnification, not coverage), making it as generously and luxuriously sized as a full-frame camera's viewfinder. This is particularly smart now that DSLRs are in decline and EVFs are proliferating—the one thing an EVF can't do is give you a direct view of the real world, letting the photographer see the real colors of the subject and the subtleties of the actual light.

I reviewed a number of early Pentax DSLRs and owned a couple, up to the K-5 of 2010. My problem with it wasn't with the camera…it's just that I'm pretty set regarding the focal lengths I like to use. Historically I characterized my lens use as follows: a ~35–40mm-equivalent prime, 80% of the time; an ~80–90mm-e prime portrait lens, 15%; and a wide-angle, 5%. If money was tight for people, I advocate spending the most money on the lens you use the most, and the least money on the one you use the least—assuming you have a good idea of how much you use what. I also think it's important that, in any given product lineup, there should be a lens you really like as your main lens. Pentax had a lens I absolutely adored optically, the 35mm Macro (full-dress name, the Pentax HD Pentax DA 35mm ƒ/2.8 Macro Limited, designed by Kato Koji, which Hoya later licensed to Tokina [thanks to Mistral75 for this information—see the first Featured Comment]), but, while I like ~50mm-e lenses and have used them a lot, they're a tad long to suit my preference for all-the-time use. The Macro, at ƒ/2.8, is a little slow as well—no real problem of course, but, for your main all-purpose lens, there are just going to be times when you'd prefer to it be a stop or two faster.

To make a long story short (unless it's too late for that), by 2012 I had just gotten weary of waiting for Pentax to come out with something in the neighborhood of the ~24mm ~ƒ/2 APS-C lens that I wanted. I've been very happy since then with wonderful lenses like the Zeiss Sonnar T* E 24mm ƒ/1.8 ZA, the Panasonic Lumix G 20mm ƒ/1.7, and my current Fuji XF 23mm ƒ/1.4 R. (Fuji has not one, not two, but three primes in my "sweet spot" range.)

(My departure from Pentax was discussed at the time, as I discovered while researching this post, in a six-page thread on Pentax Forums. One forumer, trying hard to be cynical, said "In all reality, it probably comes down to the fact that he makes more money promoting more mainstream cameras…," to which the OP, a Pentaxian called panoguy, answered, "If it was a camera review site, or some up-and-coming blogger trying to get lots of advertising and links, you might be right. However, this blogger is known for writing what he thinks, admitting his (and other's) faults, and basically not trying to be an opinion leader. Perhaps that's why he is an opinion leader!" I never saw that at the time, but what a nice compliment. Made my morning. Belated thanks, panoguy.)

'It's not you, it's me' —George Costanza
Of course, the world doesn't owe you what you want just because you want it. But I'm glad I didn't keep waiting, because today, eight years later, Pentax still doesn't offer a prime lens option in the 35–40mm-e range. Our failure to align is not Pentax's fault; it's my fault. Theirs is a business decision and I'm sure they made the right choice for the company. At the same time, it made no sense for me to stick with a brand that doesn't offer the focal length I use the most, so I made the right choice too. Simple as that.

I had a beef with Ricoh (which owns Pentax) for a while, too. They advertised on this site, and when Ricoh took over, they stiffed me on the bill! Walked away with $2,500 worth of advertising and refused to pay for it. What, too much for you, Ricoh? It was a lot to me. Scoundrels.

However, I would still review the new Pentax APS-C flagship, to catch up with an old friend and to relate the new camera to their historical offerings. But mostly to see how they fared in optimizing the optical viewfinder for the format. That's exciting. To me, at least, it's enough to distinguish the as-yet unnamed new flagship and give it an identity. Congratulations to project managers Tetsuya Iwasaki and Shigeru Wakashiro for attempting to make the most of the most important of a DSLR's advantages over mirrorless…it is a wise choice for right now.

Mike replies: Thank you for that. I corrected the error.

Albert Smith: "It is not only Pentax, Nikon lost me when they failed to fill out their DX lens line. They came out with a petite 35mm ƒ/1.8 giving a normal lens angle of view that performed very well. I was sure it was the start of a system of DX lenses to parallel the full frame range, but no. They have terrific DX cameras, but if you have to mount full frame lenses to get the lens you want, you might as well go full frame. The full frame 35mm ƒ/1.8 G lens on a D750 is smaller than mounting the full frame 24mm ƒ/1.8 on a D500…so why use Nikon DX for the moderate focal lenths? Today I use only FX Nikon and went elsewhere for DX. I went all Fujifilm for my DX system and have way too many choices for my favorite range of focal lengths."

Aaron: "Upon my return to film photography recently I discovered and fell in love with the old all mechanical Pentax MX—and one of the main draws for me is its huge viewfinder. Pure joy to look through and bigger than any of my other SLRs digital or film. As I’ve played with various digital and film systems, I’ve found that a lot of my personal evaluation of a camera depends on the viewfinder. When actually out taking photographs I spend more time looking through a viewfinder than doing anything else with the camera, so I want a good one. Another bonus of the MX is that it’s such a small SLR that when paired with the old Pentax 40mm ƒ/2.8 pancake lens it’s hardly bigger than an old fixed lens rangefinder. (The 40mm 2.8 pancake doesn’t seem to get much love online because of its image quality—but if I’m after absolute technical quality I’m not shooting a 40 year old 35mm format film camera anyway, so it doesn’t bother me in the least)."