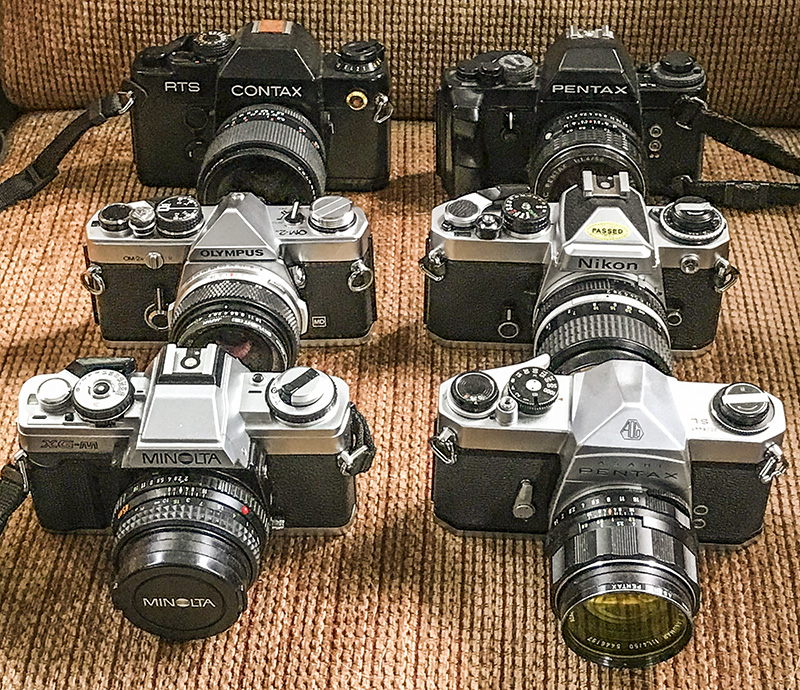 Over the coming Winter I plan to write a bit from time to time about these "eBay specials," for absolutely

good reason except for fun. I'll compare various "haptic"* or ergonomic aspects of holding, handling, and using them. All of these cameras or various close cousins of theirs are available on eBay or other used camera sites if you go looking for them.

**Proprioception: "perception or awareness of the position and movement of the body."

(That's the first time in a while I've looked up a word and then had to go look up another word from the definition of the first one.)

Luke: "Is there a word for following a trail of words through the dictionary?"

Mike replies: How about "Rathole, n., Pointless waste of money, time, or resources"….

I've been doing that all my life. In fact I used to read the Encylopedia Britannica that way (14th edition, to 1973—I was one of those who was not a fan of Mortimer Adler's split 15th edition). I'd go from one article to another letting each one suggest the next thing to look into. I could read for hours that way.

Crabby Umbo: "The Nikon, screwmount Pentax, and Contax are cameras I've known, owned and loved! Still have a screwmount Pentax (fixed up by Eric Hendrickson, thanks Eric!) that I use today. Something about those Pentax Spotmatics that fit in the hand so perfectly, and the lenses are just something. Loved the Carl Zeiss lenses, the Nikon robustness, but something about the Pentax Spotty….

"Might I suggest a Canon FTb or TLb as well? Had a few FTb rebuilt one time back in the '90s—sorry I sold them—and for some reason, love the breech-mount lenses better than the later, more plasticy FD (non-breech-mount) series. Fair warning, though, the breech-lock lenses seem to get their fit and feel from grease on the focus threads; if they're old and dried out, they spin pretty loosely."

Mike replies: That was known as "packing" and it was an integral part of the helical design. One of the kindest things you can have done to an old manual-focus lens is to have it re-packed by an expert repairman. Not terribly expensive, and it gives them new life. I used to like finding lenses in otherwise excellent condition that were dried out, talk the seller down because of the loose, dry focus action, then pay ~$65 to have the lens repacked, resulting in a fine, smoothly-working lens that focused like butter. Old Nikkor AI and AI-S lenses were prone to the problem and responded beautifully to the treatment.

I agree with you about Spotmatics. If I could suggest one manual-focus film camera that should be revived today in deluxe, modernized form, it would be a Pentax based on a Spotmatic. Cf. the Nikon S3 2000, a gorgeous modern copy of the 1958 S3. My Spottie would be a "resto-mod," though, as they're called in the car world, with a 100% finder and centerweighted AE metering. Alas, it would cost three or four thousand dollars and I would never be able to bring myself to buy one.

Juan Buhler: "Just a week or so ago I bought a black Pentax ME Super on eBay for $25. It was a bit of a gamble because the condition was unknown, but the camera works fine and looks great! The ME Super was my first 35mm camera back in 1992 or so, so this was mostly a sentimental purchase. I did shoot a roll of Fuji color film with it though. It’s hard to remember to wind the camera after each shot…. I also still have my two black MXs, and every now and then I run an old roll of black-and-white expired film and develop it in caffenol, just because it’s fun. I look forward to those posts!"

Dan Khong: "Mike, Thanks for letting me choose a present for this Christmas. I want the Olympus. It's the smallest camera made during the days when others were huge, clunky and qualify to be more like paper weights. And the 40mm focal length—neither too long like the 50–55mm nor too wide like the 35mm—is just right for my style of street photography. Please bubble wrap and courier by either DHL or FedEx. Merci beaucoup!"