Why was 4×5 (called 5×4 in Britain) the most popular large film format? There are two reasons.

First, and far and away foremost, it was the largest film format that could conveniently be enlarged. Four-by-five-inch enlargers were common and made by many manufacturers; they were competitively priced, although you wouldn't call them cheap.

Enlargers that could handle 5×7 and larger sheet film were greatly less common and considerably more expensive. Long ago in antediluvian days when punk rockers walked the Earth, I worked on an 8×10 color enlarger owned by Northern Virginia Community College, where I was teaching at the 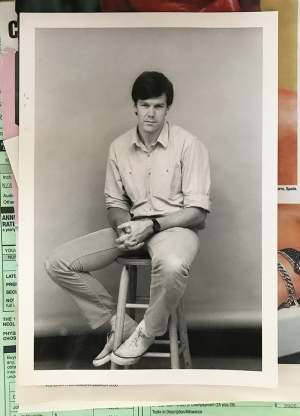 Me at about the time I was teaching at NVCC and working on that 8×10 Durst. I almost threw this picture out the other day, by mistake! And it's the only print that exists. Photo by then-girlfriend E.H., who is now a doctor in San Francisco.

Ansel Adams had a homemade 8×10 enlarger. When asked what camera he used, he liked to answer "The biggest one I can carry!" He photographed with an 8×10 for years, although eventually a Hasselblad became the largest camera he could carry. His final assistant, John Sexton, last I heard, uses a 4×5 Linhof Technika and enlarges his negatives (only so much—he's a great craftsman and his technique is highly optimized) using Saunders/LPL enlargers.

Second, the cameras are small, light, and handy. You can even handhold them (see: press cameras, for example the famous Speed Graphic and Crown Graphic made by Graflex we were talking about a week or so ago). Everything can be smaller, lighter, easier to carry, less expensive, and handier to use. The lenses can be shorter (50mm on a FF camera is roughly the same angle of view as a 150mm lens on 4×5 and a 300mm lens on 8×10). Of course each sheet of film is cheaper. Consider just the difference in weight and size of carrying six film holders for 4×5 vs. 8×10!

As a consequence of the two factors above and its resulting popularity ("popularity" relative to the LF world, that would be), 4×5 was more plentiful and more ubiquitous, easier to find, and cheaper to buy, and the film was more readily available and produced in greater variety.

Larger large formats
It should be remembered, though, that 4×5 was a compromise, if an intelligent, considered one—the balanced, just-right solution in the middle. It really is a good, viable option to get a larger camera and then contact print, which was my nefarious plan with the old Single Use Device (which I sold in 2015, I believe, although I still have the lens). For most of his life as well as for the lion's share of his famous photographs, Edward Weston used an 8×10 camera and made contact prints.

I don't even think he owned an enlarger. By the way, notice that in the video at a little after 9:00, it shows Edward in the passenger's seat of a car, scanning the landscape. Legend has it that Edward never got a driver's license because that way, he never had to share driving duties and was always free to look out the window. (Also by the way, when the film was made that those clips came from, Edward was already suffering from Parkinson's and having trouble with the disease's "masking" of facial expressions. I imagine that's why he appears to be somewhat less than normally animated.)

If you scan your negatives anyway, that's another argument for going ahead and shooting 5×7 or 8×10. A V600 is the same scanner regardless of what size neg you slap on it. [This is wrong I guess; you need a V850. Ouch! LF is expensive.]

Incidentally (I'm kinda rambling now, sorry), the most Edward was ever paid for a photography in his lifetime was $250, and the client was Eastman Kodak Company. He sold seven (color!) images to them at that price. If he were alive today I'd ask him to do a print sale with us! (Okay, made myself laugh, and that's half the battle.)

Mike
(Thanks to the reader who mentioned that YouTube video)

Tom Duffy: "Another nice advantage of the 4×5 camera compared to anything larger was the ready availability of preloaded film packs, which allowed you to shoot 16 pictures in fairly rapid succession. You could then swap out film packs in daylight and keep shooting. The film base was very thin so developing was more of a chore than shooting with real sheet film and you needed to use a glass negative carrier in your enlarger to keep the film flat while enlarging."

Greg Heins: "Surely another compelling reason for the appeal of 4×5 (or 5×4) by the 1960s was the fact that the various Polaroid options existed in this size with a film holder that slipped into the camera back almost as easily as normal film holders. I remember going off to an Adams workshop in 1968 with an 8×10 and being surprised to find myself the only person among the dozens of photographers there with anything larger than 4×5. But the learning value of being able to examine and discuss Polaroids, even with their various deficiencies, was made very clear to me as I watched my colleagues that week. Not to mention the fact that pulling Polaroids was a part of every commercial photography process, even to the extent of using a 4×5 and Polaroid to nail down the lighting (and often the client approval) before replacing the back and lens to shoot 8×10 film."

Larry Angier: "That video was nice! I had the honor and pleasure to teach with Kim at the second Al Weber Mission Portfolio Workshops at Mission San Miguel years ago. He was a pleasure to work with and had such high energy! His wife Gina accompanied him. Besides the legacy and having to walk in the footsteps of his grandfather Ed, Kim took his own road. He worked for years as a carpenter and contractor and transitioned into photography on his own terms using film and traditional photography to create his own legacy. A few years after, Kim, Gina and their son Zach had a major show at the National Steinbeck Center in Salinas showcasing four generations of this photographic dynasty. It was quite a show and the opening was well attended with many influenced by so many decades of great work produced by them all."

Richard Man: "Re '…the most Edward was ever paid for a photography in his lifetime was $250…': There is a YouTube video of the Weston 'kids,' filmed not long after Edward passed away, if I recall correctly. They were saying something like 'Wow, the collector's market really has driven up the prices of Edward's prints!' and they were talking about how they had gone up to $600–$700.  😉  "

Mike replies: Maybe ten years ago, the curator of photography at the Art Institute of Chicago mentioned that you really couldn't get a good Edward Weston print, printed by Edward, for less than $800,000. It might have changed since then, too.

G Dan Mitchell: "While I cannot speak for John (nor his wife Anne Larsen), when I met him in the Yosemite backcountry a few years back they were using Hasselblad medium-format cameras."

Mani Sitaraman: "One of the now almost forgotten (and then little-known) uses for an 8×10 enlarger was to make a 2x enlarged 'contact sheet' of a roll of 135 or 120 film onto a single sheet of 16×20 paper. I have seen one from a roll of 35mm negatives, and it was unique and, well, beautiful. I expect an enlargement from a roll of 120 film would have been even more striking. I'm struggling to recall the title of an exhibition in the 1980s(?) that displayed a series of 16×20 'contacts' by some famous photographer."